In their Q1 Finance Results press releases and also during the Q1 calls, both IonQ and Rigetti discussed their roadmap plans for future processors. Peter Chapman, CEO of IonQ, mentioned that the company is currently working on three different generations of processors in different stages of development. The latest released version is called Aria which can hold up to 32 qubits. It is currently available in IonQ’s own cloud system and will also be available on Microsoft’s Azure system soon. The next version to be released is codenamed Forte which won’t have a much larger number of qubits than its predecessor Aria but will have lower noise and improved fidelity. It will also pioneer a new approach for controlling the laser that manipulates the qubits using a technology called Acousto-Optic Deflector (AOD). 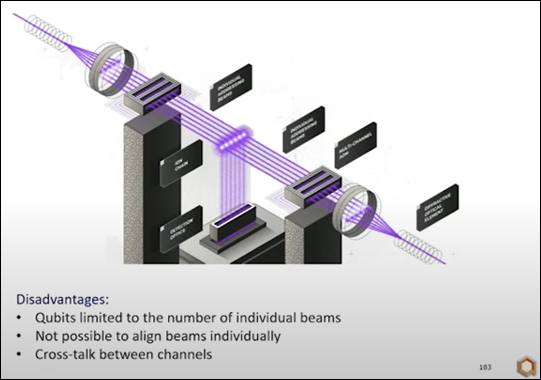 Laser Control as Implemented in Aria 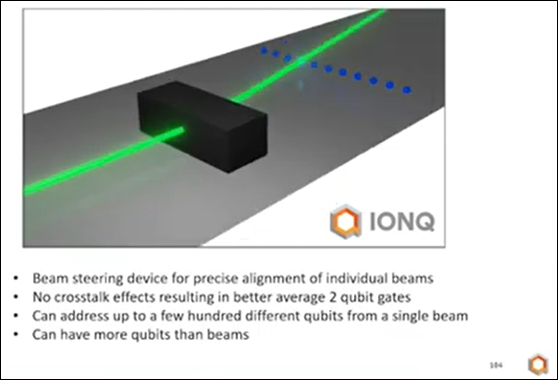 As shown in the pictures above, the current Aria processor uses a light modulator to control individual laser beams for control while the Forte will use the Acousto-Optic Deflector.  It will be software controlled can precisely aim a laser by deflection to control the desired qubit. This approach provides significant advantages because adjustments such as calibration can be implemented via software instead of mechanically. This approach reduces or eliminates crosstalk problems and can also lead the way for more scaling since a single laser beam can address as many a few hundred different qubits.

One surprise in the announcement was that the Forte processor will still use Yterbium ions like its predecessor. IonQ had previously indicated they are planning to move to use Barium. But apparently, this will not occur until the next generation of processors after Forte. Additional information about IonQ’s plans is available in a news release announcing the Forte processor available here and comments from Junsang Kim, IonQ CTO, during the Q1 financial results webcast which you can listen to here.

Rigetti discussed their roadmap for future processors. The latest processor currently available is the 80 qubit Aspen-M which consists of two 40 qubit die which are connected together. Rigetti used this processor as the vehicle to develop their multi-die processors technology. It took them six years to develop and they have more than 20 patents as a result of this effort. The multi-die approach will be a keystone technology for many of Rigetti processors in the future.

But before they build more multi-die processors, they are first developing an improved single chip 84 qubit die to use as the base. The new chip they are developing will have an updated lattice, higher connectivity, and improvements in two qubit gate fidelity and stability. Rigetti plans on releasing an 84 qubit processor in early 2023 using this chip. And then, later in 2023, they plan they plan on creating a multi-die implementation with 336 qubits using four of these chips connected together. In the following years, Rigetti expects to have a 1000+ qubit chip in 2025 and a 4000+ qubit chip around 2027. In their Q1 press release and earnings call, Rigetti highlighted some of the challenges they are facing in their technical developments including higher than anticipated costs for labor, equipment, and system component, market and supply chain conditions, and available working capital. But as we have said before, quantum is a difficult technology and we’re sure that many of the processor companies are facing similar issues.

For more on Rigetti’s plans, you can read their roadmap comments in the Q1 Financial Results press release located here, and you listen to comments from Chad Rigetti, CEO, in the Q1 earnings call here.